A friend of mine on Twitter asked me for some tips on staying safe from vehicles while out running and I thought it would be a fantastic topic for a blog post (and also way too long for a Twitter post).

Let’s start off with the easy stuff.

Be seen. Gear can be a game changer when it comes to visibility, and the first step in not eating a bumper for breakfast is to make sure the human being behind the wheel sees you. How to best accomplish this varies on the time of day you generally run. Very early mornings/evenings require reflective gear. Nearly all runner specific gear has a bit of reflectivity in it, but you’ll want to go whole-hog. A vest is a fantastic way to really “glow”. You can either choose a vest specifically designed just for being seen, or a hydration vest like the AK which is simply festooned with a variety of reflective thread, material & piping.

The best spot to really catch the eye of drivers is your head. This it the tallest part of you, and you don’t want to have it be lost in the background. I like either wearing a nice bright visor (white or yellow are great) or a buff style head sock in a super bright design or color. White stands out, as do the various neons.

Try to wear runner specific shirts/shorts as well, and choose bright, contrasting designs. You want to show motion, and having some dark on light helps that. You can even wear contrasting arm sleeves on cold mornings/evenings or in the winter gloom to help. If you’re one of those “only wear black” guys or girls… get over it, or get used to having a Mercedes logo jammed unceremoniously up your behind by a guy whose wife just texted him “Saw ur browser history. Need2talk.” Yipes. Orange really is the new black. 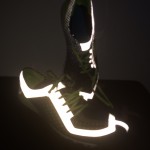 Don’t forget the shoes! They’re the part of your body that is churning and moving the most, and lots of reflection can pay big dividends here. Something like the SKORA Core will get attention.

Finally, and possibly most importantly, wear a headlamp/rear lamp if you’re running in dark/twilight. Even during the late morning, there’s plenty of shady places where you might blend in, and often the cars have shut off their lights by then.

Yes. I know. Bear with me here. Humans are pattern detectors. Nothing on earth is better at detecting patterns than human beings. There are certain patterns that we see that say “car” or “hamburger” or “runner”. However, if you are hunched over, shuffling or otherwise just not looking like a runner, it is possible someone will misjudge your speed. More likely, they will simply not notice you, imagining you to be a slow walker, or someone shuffling along. It only takes a moment to get in trouble.

Run tall. Drive those knees. Keep the head tall, looking towards the horizon while scanning. Don’t worry if you feel foolish like you’re preening or prancing, you’re not. Just keep the form. It’ll help your running too.

So that’s the easy stuff, the “passive” stuff, making sure people see you. But let’s face it, people in cars are simply not looking for runners. Don’t get me started on bikers, motorcycles or other pedestrians. The benefit runners have is that we can be on the sidewalk most of the time. The danger mostly comes from driveways, crosswalks and places where you don’t have a sidewalk.

My philosophy is to always assume people can’t see you. At the same time, assume there’s cars out there coming for you. Be a little paranoid, and hyper-mindful of your environment. Don’t fuzz out. Running can be meditative, but the city is no place to get lost in a trance. If you look for clues, you’ll give yourself a better chance. Is there a driveway ahead? Looks like it. Huh… there’s an overgrown bush there that might obscure your view of a car coming out. Assume it is there. Assume it is coming, will not stop and potentially will swerve towards you. Until you’ve passed, assume the worst.

Not everyone has the luxury of choosing when to run, but try to run at times and in places with the least cars. Parks work well, as do trails obviously. If there’s a quiet, off the grid neighborhood nearby, measure out 1/2 mile segments and do some laps. Choose times when there aren’t shifts of population. Weekday mornings and late afternoons are some of the worst times, and you will almost certainly get into trouble then. In the morning people are sleepy, distracted by coffee and early emails on their phones and putting on their wigs. They’re doing everything in that car except driving it safely. In the afternoon people just want to get home, they’re hungry and pissed off because they just finished work and they see you out running. Or don’t see you.

A good trick is to double up 2 short runs. You can get in 2-3 miles in 20 minutes in the morning and take a shower in another 5-10 minutes, then put in 10 minutes of fartleks or stairs during lunch. You can cleanup with wipes in the office bathroom without anyone being the wiser. Alternately you can get in some quick runs after the traffic is done, but only if your neighborhood is safe. Also make sure you wear your reflective gear just in case the sun goes down while you’re out.

Finally, the best way I’ve found not to be hit by cars is to ensure that the driver sees me. Make eye contact. Wave (nicely). I love wearing my visor because the “hat-tip” is both charmingly disarming, and just anachronistic enough to get someone’s attention. Who does that anymore, right? I get a lot of smiles when I give people the hat tip. Generally at worst I get a wave or just their attention. If you’re not sure they see you, stop. At worst there will be that awkward “oh, are you going, or am I going?” Sometimes you’ll get a honk telling you to go. Hat-tip. Thanks sweetie. Have a fun drive home. I have 3 more miles. Head up. Knee drive. Headlamp on.