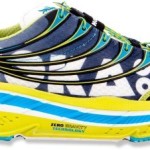 A while back I picked up the trail version of this shoe and liked it a lot. With a marathon coming up I decided to grab the road version of the same shoe, mostly due to never having run that much distance before (and most especially on pavement).

If you’ve seen the Evo Trail, you’re probably fairly familiar with the Tarmac. The upper is damn near identical, minus a couple small details. One that might be a potential deal breaker depending on how the last fits your dogs, is that the Tarmac does not have an extra set of top eyelets. Now, granted, to even use those on the Evo you would have needed to cut the quick-laces to relace the shoe. Not something I wanted to do, and as it turns out, not something I needed to do.

Otherwise, you’ve got a fairly standard build-out on top. Welded seams, airy mesh, quick laces, heel strap, soft foam around the ankle. For me, comfortable right out of the box.

The major difference between the Tarmac and the Evo is the sole, and that makes sense. The Tarmac is designed for trails, hard trails. Rough trails. Trails, as it turns out, that I don’t run much. Most of my mileage was on fire road style easy trails with occasional gravel.

The Tarmac brings wide swaths of rubber to the bottom of the shoe, providing a nice solid and sticky base under the now familiar mushy fluffy padding underfoot. This had the slight issue of adding some weight, but mostly that wasn’t noticeable.

I mentioned this in my Evo review, but it bears repeating here. The idea behind HOKA shoes is that they provide a very cushioned running surface, but they do not provide any support. The shoe deforms underfoot as a pad, or sand or soft grass might. If you’ve run in traditional running shoes, especially one that provide some kind of “stability” or “motion control” you might be in for a shock, HOKA shoes take “neutral” to a whole new level and then some. The 6mm drop is about half of what a lot of “standard” running shoes have, so for most folks that’s a fairly big transition.

For me, that’s ideal. I tend to run in fairly minimal shoes to build foot strength on shorter runs and then go to a big max cushion shoe for distances so as to keep the bottoms of my feet happy. I would actually prefer less of a drop, but honestly there’s so much cushion that I don’t really notice the drop. I run forefoot anyhow, so the drop isn’t that noticeable.

Who should get this shoe? Well, there’s probably a lot of people who might benefit. Basically the Stinson Tarmac can run on any roads and most light to medium trails, and does an excellent job of smoothing out the lumps and bumps. Does it magically make all the shock of running go away? Of course not, and anyone who tells you different probably failed their physics class in high school. It IS good at absorbing/slowing some of the energy inherent to a runner’s stride, but optimally you will want to land mid-foot. That activates the Tarmac’s rolling shape and gives a nice little forward scoot, making for a pleasant stride. You can definitely land rear-foot/heel, but for me that just isn’t pleasant at all. Your mileage may vary.