I slowly trudged up a steep, slippery and mostly unmarked (except by bones, cow patties and the occasional ribbon) hill in San Luis Obispo and seriously considered murdering my RunKeeper app as she, once again, passive aggressively suggested perhaps that I might move faster. For about the 10th time.

I was here because a few days ago Luis Escobar had messaged me over Facebook, inviting me to come run in his race and meet the great Tarahumara runner Arnulfo Quimare.

Well, OK, that’s not completely accurate. We need to go back a bit further. I was here because in 2006, a knife
throwing, hatchet wielding, cursing like a pirate, shaved head sporting author and runner named Chris McDougall took a little trip into the Copper Canyon region of Mexico in search of a legend, and then wrote a book about the whole thing called “Born to Run”. He didn’t go alone. One of his companions was a veteran ultra runner, a multi-time finisher of the H.U.R.T. 100 & Western States (among others) and  kick-ass photographer named Luis Escobar. They were traveling to see, meet and run with the fabled Running People of the Barancas Del Cobre, the Raramuri, an indigenous tribe of people who might just be the best runners left on the planet. One of those people was a great champion named Arnulfo Quimare, who would end up racing against the best ultra champions in the U.S. in what would eventually become the Ultra Maraton Caballo Blanco.

Read the book, it is a great story.

But spinning forward to last week, I’d been sitting in bed, trolling Facebook before heading off to sleep, when a post popped up, full of bright orange and white. Arnulfo, in his native clothing, and underneath, a post about how he would be traveling to the U.S., and running in one of Luis’ upcoming races. Thinking he meant the BtR race series, I immediately posted “Dude, I’m there!” and before I could take a breath, Luis was messaging me, inviting me to come run. This coming weekend. Oh boy.

Obviously you don’t say no, but it would take some cajoling and puppy dog eyes to deficit finance permission to drive alone to San Luis Obispo for the race. Hotel booked, trip planned, car packed, I headed down there on Friday afternoon.

I’d finally seen Arnulfo that morning, and he was everything Chris had said about him in the book. His outfit was spectacular. His legs looked bulletproof. He stood about stoically as all the chabochi ogled and whispered about him. To say he is like Joe Montana or Lebron James is not an overstatement. In fact, going to see Lebron is as easy as picking up a ticket to local basketball game. Actually seeing Arnulfo though? Ridiculously difficult. We were quite lucky.

But now the races were afoot. Arnulfo was competing in the 50K, and long gone ahead of me. I’d chosen the 10K as I wanted to be sure I would finish, my DNF at Overlook still echoing in my head. Plus I knew Luis. His “10K” would not be a gentle trot around the local park with Hot Chocolate at the aid stations.

It began gently enough. We headed out through the rolling terrain of the gorgeous El Cuesta Ranch, an area normally closed to people that weren’t family, workers on the farm, or lucky wedding guests attending a nuptial on the sprawling grounds. The ranch owner, a friend of Luis’s, had graciously provided use of his land this one day for a bunch of hippy dirtbag runners to go tromping about.

Soon enough, the gently rolling ranch road took a vertical turn. Up a goddamn hill. I could see Luis smiling in my head. And so here I was, with my RunKeeper app helpfully suggesting I move faster, calves burning, I slowly made my way up what was essentially a very steep, muddy ramp.

I knew there was method to Luis’s madness though. The area was gorgeous, and the best views are almost always from up on high. He had very little time to get us up as high as he could, and this was the result. Plus the next hill. But damn, what a view.

Bitching about climbs in ultra races is like complaining that the sun is hot. These are trails. There’s climbing. But what made this race especially nice was that while the uphills were fairly soul crushing, the downhills were rolling speed-fests where you could (if you were so inclined) open up and get some serious momentum going. IF your legs were up to the task. 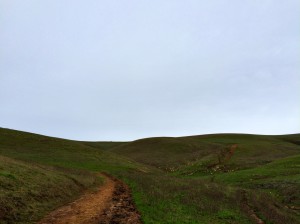 Mine weren’t, so I ambled along enjoying the views. At nearly the 5 mile point we ran into a long, winding climb. It wasn’t steep, but it went on for quite a while. We could see other runners ahead, and a small dot in the distance was our “aid station”, a lonely vigil for a guy standing in the wind and rain atop the ridge with a 50 gallon jug of water.

Yes. That’s what you got. Water. Its a 10K. Well, it is sort of a 10K. But, in any case, you didn’t need to refuel. And honestly I didn’t even stop for water. My bottle was still 1/2 full. The gentleman running the station was a trooper and helpfully pointed me in the correct direction for the 10K.

At this point the 50K, 25K and 10K courses had all shared the same path, but now the longer distances took a right turn while we went left. Theirs was an out and back with (SURPRISE!) more climbs, but for us the rest of the course was an easy, winding downhill back to the start. About halfway down that, the 25K and 50K racers took another, different right turn up a freaking mountain. No, not a mountain trail. A mountain. That way. Up. There’s a few flags. And then come down the other side. It was glorious, or so I heard.

I cruised down the muddy trail, with the rain and wind whipping lightly here and there, passing through the wedding area and then finally back to the finish, where I rang the finisher’s bell and slugged back a shot of Fireball Whiskey, because of course there’s Fireball. I had no clue what my time was, nor did I care. A casual look at my bitchy Runkeeper results said I’d gone 5.9 miles in just north of 2 hours. I totally didn’t care, it was all about just being out there and running. Very raw, very old school.

I managed to get some warmer, dryer clothes on, and sat around eating delicious pulled pork sandwiches, chatting with the ranch owner and waiting for the 50K finishers to come in. It was an interesting course for watching people finish. I was one of the last 10K runners to finish, but a while later the 25K folks began to trickle in. However, the course was such a bear that the slow 25K runners would end up mixed in with the 50K folks for the rest of the day. We’d cut off any 50K runners that weren’t at least on lap 2 by noon, but that still left a lot of people on the course. It was a cool effect. Whenever anyone came running up the road, everyone would start cheering. 25K, 50K, it didn’t matter. We wanted them to ring the bell and take their shot.

The first 50K finisher finally came in. We waited a bit. Then a spot of orange appeared. Loping in, totally relaxed and smiling, Arnulfo Quimare came bounding up to ring the bell and slam back a Fireball. The place went nuts. Christopher had described Tarahumara running as other-worldly and he was spot on. Arnulfo literally looked like he’d just come back from trotting down to his car because he’d forgotten something. Just super chill, in his hand made running sandals covered in a bit of mud. He immediately called for some agua, then eviscerated an entire family of oranges. I’d learn later that he did the entire 50K on nothing but sips of water. Then he hung out with his friend who was selling some Tarahumara handicrafts for most of the rest of the day, until the last runners came in. I was lucky enough to pick up a set of Huaraches and a signed, hand-made ball.

If you’re looking for a laid back, old school trail race where the distances are approximate, your finish times are approximate, the course is approximate and the number of shots you take at the end are approximate, this might be your scene. If you need a particular dietary load-out at the stations and want to download a scatter-point map of all of the trail pitches along the course… um, you might want to pass. Otherwise, sign up next year and join me!

Or… if you’re raring to go, Luis’s group does more races. For example, the Born to Run series, which includes camping, drinking, singing, music, Christopher MacDougall, other special guests, The Fat Panther and, oh right, a BUNCH of different race lengths such as a 4 day, 200 mile, 100 mile, 60 mile, 30 mile, 10 mile and the famous 0.0 KM. Go here to read more and sign up, ya filthy animals: http://ultrasignup.com/register.aspx?did=33025