No, I haven’t been hacked. What is a dedicated minimalist guy doing reviewing a super padded trail running shoe? Turns out that sometimes minimalism is in the form, not the structure. But first, some history.

When I first saw a HOKA ONE ONE shoe on the shelf at my local shoe store, I literally rolled my eyes. I was neck deep in the “little as possible” mindset at the time, and here was this nearly comical shoe that at worst looked like something a futuristic clown would wear, and at best looked like the footwear of choice for astronauts doing laps on a course on the moon. I was over and done with “traditional” running shoes. They hurt me, this was clear. A motion control shoe nearly ended my running career 8 years ago. I’m not built for them, and my body rebelled. So here was what I assumed to be more of the same. It was like telling a vegan “Oh, you don’t like this chicken wing? Well here’s the entire chicken! In fact, have two!” Well, to paraphrase a well known cliche, don’t judge a shoe by its welding.

Assumptions can be deadly. The issue, as I see it, with traditional running shoes is their preposterous claim to “improve” or extend the function of the human form. They control our motion, change our stride. As if some company could improve on millions of years of evolution with some plastic, fabric and rubber. The minimalism movement was a backlash against this “born broken” philosophy, a focus on form of body, gait, stride and tempo. The shoe became little more than an ultra light layer of protection against things that could pierce or otherwise ravage our skin, but there was no talk of bending physics to our will.

Let’s talk about that for a second. The idea that a shoe can both cushion impact and return energy is, on the face of it, absurd. A return of energy intrinsically means that the impact is being forced back up into the leg. This was Barefoot Ted‘s essential mistake in believing he could use Kangoo Jumps to run in with a bad back. Outside of the shoe’s weight and poor structure to even attempt to run in, it was completely undampened. As close to 100% as mechanical efficiency allows. The thing has leaf springs underneath your foot. You ever take a speed bump at high speed in an old pickup truck? Exactly. Some even more extreme versions of the concept even allow people to do huge flips in them. That’s NOT cushioning.

Traditional running shoes employ a similar philosophy. They use compressed air pockets, rubber and even steel springs to drive down-force back up into the body, “helping” us run. Newsflash, the human body doesn’t need help, thanks. Nature has built one of the best running structures on the planet into our legs and feet.

What we could use help with though is that pesky ground. Barefoot Ted once said something along the lines of “Humans didn’t invent rough surfaces, they invented the smooth ones”. To that he could have added “hard ones”, though of course there’s plenty of rocks and stones out in the wild. Have you noticed how often barefoot and minimalist advocates talk about running on surfaces such as sand and grass/dirt? Those surfaces are wonderful to run on because they deflect under our feet, dampening our impact, but do not return a huge up-force into our leg. Sand and snow dampen the most. A surface like asphalt has nearly zero dampening.

So instead of a Kangoo Jump or asphalt style of energy return, it seems like it would be ideal to be able to have something closer to a grassy field level of dampening along for the ride. 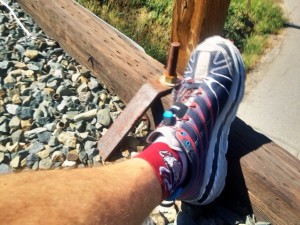 Enter HOKA ONE ONE. While the shoe may look like a traditional design from the outside, albeit oversized, it is anything but. That enormous sole is designed to act like a portable grassy field underneath your foot. Just like a grassy field, it deflects and moves around underfoot, there’s no support structures. The foot is cradled, but not coddled. Just like in a minimalist shoe, if your foot is weak you might have some aches at first in the HOKA.

So, onto the review. I went out two days ago on a 10k trail run and decided the time was here to get a real, dedicated trail shoe. Yesterday I ran 200m repeats at the track and today I hit up my local shop and picked up a pair of HOKA ONE ONE Stinson Evo Trails. This shoe is designed primarily as an off-road shoe, with definite tread designed to grip dirt, rocks and roots. The Stinson Evo is HOKA ONE ONE’s second highest “cushion volume” shoe (The Mafate has more fluff) and utilizes a welded upper for lightness. The sole is blown eva foam, and quite tall.

How does it run? The initial feeling is weird, in a giddy making you giggle kind of way. You actually feel the shoe deflect under you, like a slightly wet grass field, except when you unload your weight, the field is ready to deflect again. There’s really no “support”, but the foot is somewhat cradled. HOKA includes 2 “insoles” with the shoe. I put that in quotes because they’re really not there for support, and I like that. One insole is totally flat (the one I use) and the second takes up a little more space inside the shoe and provides a smidge more arch support. My advice is to dump that one and just make sure your foot is strong. Eric can help.

Actually running in the shoe reminds me a little of running down a tumble-tramp. The heck is that? It is a long trampoline we used to use to practice our gymnastic tumbling routines. It was tighter than a standard tramp but softer than an exercise spring floor. The HOKA “bounds”, gently rolling your feet forward as you stride, deflecting and cushioning under-foot.

The sole of the Stinson Evo Trail is designed for off-road traction, with tons of tiny, sticky knobs. It provides excellent grip on dirt, rocks, pretty much anything you’ll find on the trail. It also works well on the road, but those little knobs are not meant for cement or asphalt, and quickly begin to wear. A better choice would be the HOKA One One Stinson Tarmac, the road version of the Evo Trail. I’m hoping to pick up a demo pair of Tarmacs for testing and maybe for use in the CIM this December (Hinty HOKA Hint Hint guys, shoot me an email). The heel drop in these puppies is a nice, light 4mm.

The lacing system on the Stinson looks gimmicky but is a joy to use. The super slippery, thin laces and “pull-tight” mechanism make adjustments and quick take-offs easy. There’s plenty of padding to prevent hotspots, and the upper flexes beautifully as you stride, something a lot of other shoe companies could stand to learn from.

Sizing on the HOKAs seems to be a bit weird, I definitely recommend you go to a local store and try them out there (I purchased mine at Fleetfeet Sacramento, a great little local running shop). I’m usually a 9.5 to 10 in shoes like the Altra Provision and Sketcher GoBionics, but had to move up to the 10.5 in the HOKA. I’m guessing that the more traditional last created a bit less toe room for me to play with, and I also wanted a little more room for when I wear my Injinji toe socks, which use up a touch more toe volume in my experience than traditional socks.

So, bottom line, what’s up with this shoe? Straight up it is like a cheat code for your legs. The shape of the sole cushions and rolls, helping with a natural, smooth stride. The upper is soft, comfortable and just supportive enough without being a tank. This is a killer distance training shoe, and a solid candidate for long distance racing, at any level. The HOKA team is killing it in the Ultra world, and I can see why. A runner I met and chatted with in Napa said it best: “If you clone yourself, and put HOKAs on one clone and normal shoes on the other, they will both get to the top of the hill at the same time. But the one wearing HOKAs will smoke the other one to the bottom”. EXACTLY.

Who won’t like this shoe? Well, if you’re used to a motion control shoe the HOKA will feel sloppy. Oddly enough I think the ideal candidate is someone with strong feet, who has spent the time running in minimalist shoes but wants a bit of fluff underneath. If you’re sloppy, there’s a strong possibility this shoe could hurt you. It rewards clean, smooth and solid form. It rocks downhills, loves it when you turn the juice on and accelerate. It goes up and over rocks and roots like they weren’t there and is light enough to make maintaining your cadence a snap.

A few months back I went to go see the Gentleman Jurker himself, the God of Ultra, Scott Jurek at Cliff Bar’s headquarters in the SF Bay Area. One of the questions that came up was Scott’s opinion on the whole minimalism scene. He said he felt it was overblown and potentially dangerous because of people trying to jump into it too quickly, due to the likelihood of injuries. I agreed, though I felt like he could have touched more on the positive aspects of minimalism. Then Scott pulled out what was, at the time, a show stopper for me. He said he thought shoes like the HOKA One One brand were the future of Ultra.

Let me put that in perspective for you. Scott will go down in history as one of the greatest runners ever. He has been and continues to be sponsored by Brooks, and is the designer of their flagship trail shoe. For Scott to say, with full honesty in a room full of runners that he feels HOKA is the future of Ultra would be a bit like Barefoot Ted announcing tomorrow that he’s accepted a sponsorship from Nike. OK maybe not QUITE that extreme, but it was a shock. As a total neophyte in the trail running community I sat there with mouth gaping open, alongside about 50 other jaws hitting the ground.

Now I see what he meant, and also that he wasn’t using the HOKA as a counter to minimalism but as an alternative, and an effective one. One that I am very quickly becoming addicted to.

High: Incredible cushioning, comfortable upper, solidly built
Low: Kinda pricey, sloppy runners need not apply, you look like you’re on a moon mission wearing them (this might actually be a high)

2 Replies to “Gear Review: HOKA ONE ONE Stinson Evo Trail”