With apologies to Dr. Thompson

(The events told here may or may not have happened. The people described may or may not exist. There is only pink, yellow, stripe and blue. That is all any of us need.)

We were somewhere near mile 3 when the energy gummis began to take hold. I remember saying something like “I feel a bit lightheaded, maybe you should run ahead…” And suddenly there was a terrible roar all around us and the trail was full of what looked like skinny bearded bears and antelope, all swooping and trotting and leaping as we plodded along at about 3mph in the growing light of a trail wending its way through a ranch in Los Olivos.

It was just past six in the morning, and many of these creatures still had a hundred miles to go. They would be tough miles. Very soon, I knew, we would all be completely breathless. But there was no going back, and no time to rest. Well, except back at camp, where we’d be looping through every 10 miles.

Months ago I’d sat huddled over a beer in San Luis Obispo after the La Cuesta as a pride of tanned, rippling runners sat with a rancher and his wife, talking running and a particularly vicious form of plant that resided in the local mountains. I was asked if I might have an interest in another event coming up, a premiere off-the-road foot race, a fantastic spectacle put on by the Guapo Sombrero, El Coyote himself, The Sheriff, Luis Escobar.

This was a serious undertaking, with elements of extreme personal danger. It was clear that a person does not fall lightly into such an endeavor, and so I fell the only way I knew how, like a Fat Panther. I was going.

And so, months later, I loaded up the Blue Beast. The back of the car looked like a mobile running store. I had 3 pairs of shoes, 2 sets of running sandals, 3000 calories worth of bars, gels, gummis and candy, 4 changes of stretchy clothing and 5 gallons of Gatorade. Oh, and my signed waiver, $10 and a cowboy hat.

I figured that if a thing like this was worth doing, it’s worth doing right. A leopard sarong lay folded in my duffel. The only way to prepare for a thing like this, I felt, was to dress up like a Fat Panther and get crazy, then screech off across the ranch and cover the mileage. Never lose sight of the primary responsibility.

There was, of course, also the socio-psychic factor. Every now and then when your life gets waylaid by constant jackassary and the weasels start closing in, the only real cure is to load up on heinous chemicals and drive like a bastard from Sacramento to Los Olivos. To relax, as it were, in the womb of the ranch. Just roll the windows down, lube up anyplace that chaffs and move out with the music at top volume, and at least 40 tabs of NUUN.

I’d cruised at semi-legal speeds through the packs of steel and plastic shrouded predators screeching and roaring their way across the freeways of southern-central California and arrived to a quiet scene. The gate, as indicated on numerous occasions, was not locked. I slipped a ten to the guardian a few hundred meters up the dirty dust road, and drove slowly up the path. I did not realize then that this moment would be the last vestige of sanity I would know this weekend, as everything would soon plunge into the very maw of madness.

Of the two loops, pink was the friendly uncle who always brought you cool candy from overseas, knew fun stories and was not currently wanted by any authorities, both domestically and abroad. A loping, rolling trail, it presented few dangers outside of the standard fare.

The yellow loop was a bastard. An absolute knee-biter. A no-good dumbo nothing. The view, however, was spectacular. Earned through endless climbs up relentless hillsides, and then tossed off a cliff. To be fair, I survived. And the view was, indeed, spectacular. Luis’s wife asked that I don’t use this word anymore. But, seriously, fuck yellow loop.

For the 50 kilometer (around 30 miles for us bacon munching McMericans) one was tasked with running the pink loop twice, with the yellow loop in between. It was pleasant until it wasn’t but then was quite pleasant again. Which, if one is to do a thing, is not a bad way to go.

A frequent visitor to Mr. Escobar’s events knows the rules: stripe is turn, blue is bad. And the marking of the trails was faultless. As much as I tried, I could not get lost. So far as I know, not a soul got lost. This is impressive as some runners covered nearly 10x my mileage, running day and night. Occasionally chased by squirrels, snakes, cows and a unicorn.

I finished my plod (a 10 hour 30 miler can only be called a run or a race after consumption of a serious cocktail of drugs & alcohol) and rolled in just in time for the Dirt Bag Promtm.

A live band played extremely serviceable music while a swarm of lunatics (literally, Luna Sandals had a booth) danced, jumped, hula hooped, drank and made my leopard sarong running gear seem tame. Earlier, a 0.0km race started and ended at noon. I believe it involved debauchery, but I could be wrong. (I’m rarely wrong). Large, bear-like men wrestled for an excellent cause. The very poorly titled “No-talent Contest” showcased how well Ultra Runners did things other than run long distances, pee on the go and poop in the woods. And meanwhile the entire time, runners running the 4 days and 200 mile race zoomed around in circles, joined Friday evening by the 100 milers and Saturday morning by the 60 milers, the 30 milers and the 10 milers.

If you’re not aware, this race gets its name from the book “Born to Run“, by Christopher McDougall. Who, as it happens, was there. We now have matching tattoos. 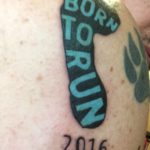 He wrestled people and slapped less permanent versions of the same tattoo onto the cleavage of eager women, and other assorted body parts of assorted runners of all sizes, shapes and sexes. This is the sort of thing that happens here. Another thing that happens is Barefoot Ted, who was also a star of the book, showing up to help man the Luna Sandals booth, dance, hula hoop and zip around on an electric unicycle. Luis was, obviously, also in the book. His photos are legendary. And the native Mexican handcrafts arrived alongside the great Tarahumara Champion, Arnulfo Quimare who brought family and friends. Arnulfo was also a star of the book and beat the man who was, at the time, the greatest American male ultrarunner in the world in a footrace in the Copper Canyons. He is seriously amazing to watch, by the way. He runs fast across terrain in sandals the same way the rest of us open doors, with practiced efficiency and alacrity.

As a fan of Christopher’s book, I felt like a visit to the race of the same name would help tie me in to that story. As it happens, it didn’t. But I’m OK with that. That story’s been told, and it lives now in the mists of time. Some of the main characters of that book are no longer with us. In person, at least. But their spirits live on in this and other events, and are helping to write a new story with all of the tribes that come to run. Mas Locos. Aravaipa. Sole Runners. The Dirt Bag Runners. And so many more.

This year was a special year, as it was the first Born to Run without Akabill. He was one of the hearts of the race, and forged necklaces for those who finished to wear around their necks. I am lucky to carry one of those necklaces. Moving forward, another wonderful artist is crafting these pendants, and hundreds of runners will earn them over the next decade, as I did on Saturday. Along with Fireball headaches. Sore feet. New friends. And pictures you’re kinda hoping the significant other doesn’t see. What happens in Los Olivos stays in Los Olivos. Well, except the tattoo. And the dust. And the buckle, shirt, friendship, sore legs and love. See you next year.

2 Replies to “Far and Loafing in Los Olivos”